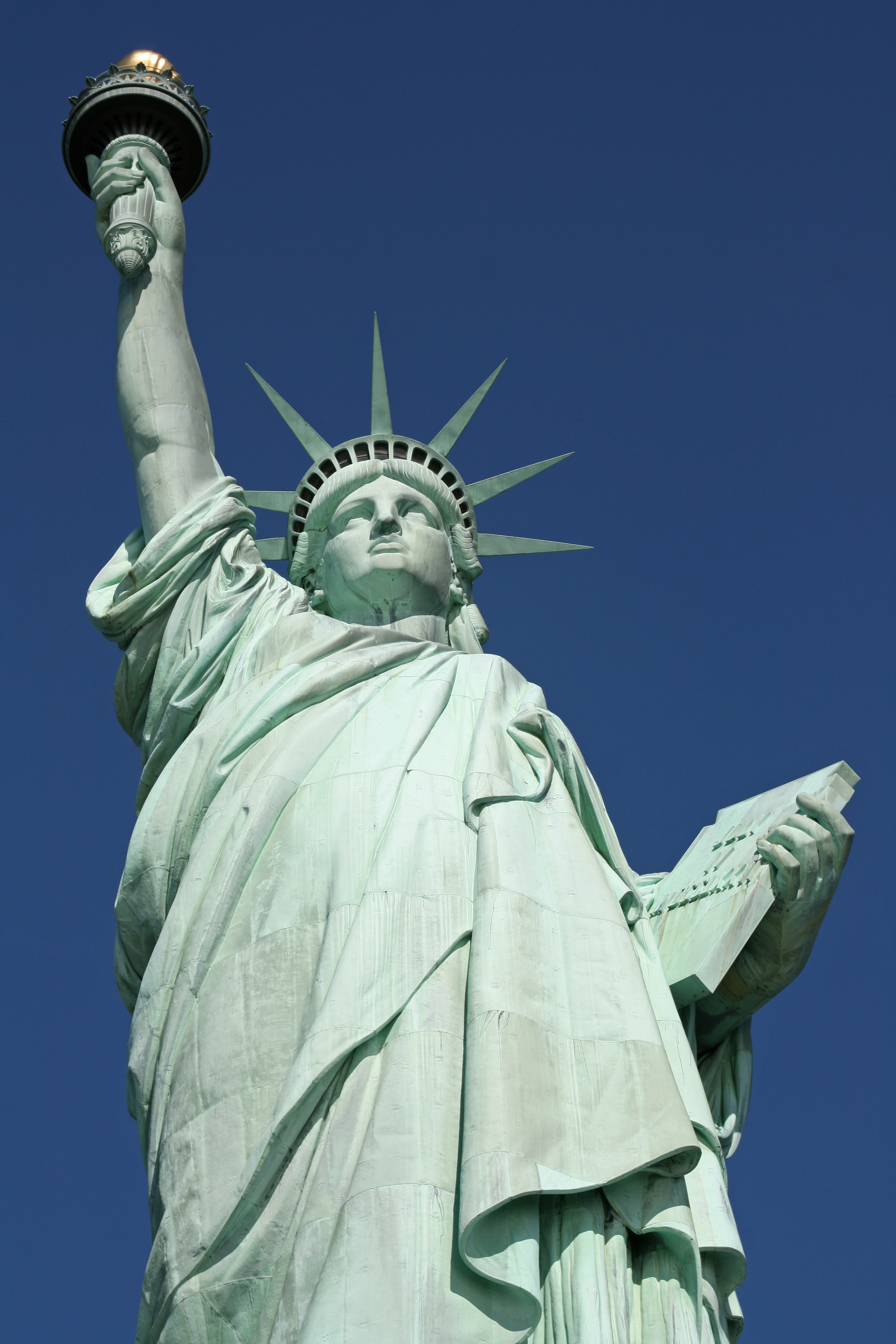 Today was our whirlwind tour of the Big Apple. And though there’s no way you can do justice to a city like New York in a day—or even a month or year—Carolyn and I were determined to see as much as we could of the city in the short time we had.

The day began before 7am when we hustled the kids out of bed and into the car for a harrowing rush hour drive down to Liberty State Park to take the ferry over to the Statue of Liberty. Lady Liberty was looking terrific—exactly like I remembered her from my own visit some 30 years ago. Unfortunately, just as then, it was impossible to go further up than the base of the statue: a long list of safety concerns appeared on the wall as reasons no one was allowed to go up to visit the crown any more. (30 years ago, I’m not sure if the reason I never saw more than the pedestal view was because it was off limits, or whether my parents, being somewhat sensible, didn’t want to weather the 3-4 hour wait to ascend and descend those stairs). Despite the lack of altitude, it was a beautiful day and made for spectacular views across the harbor to Manhattan. 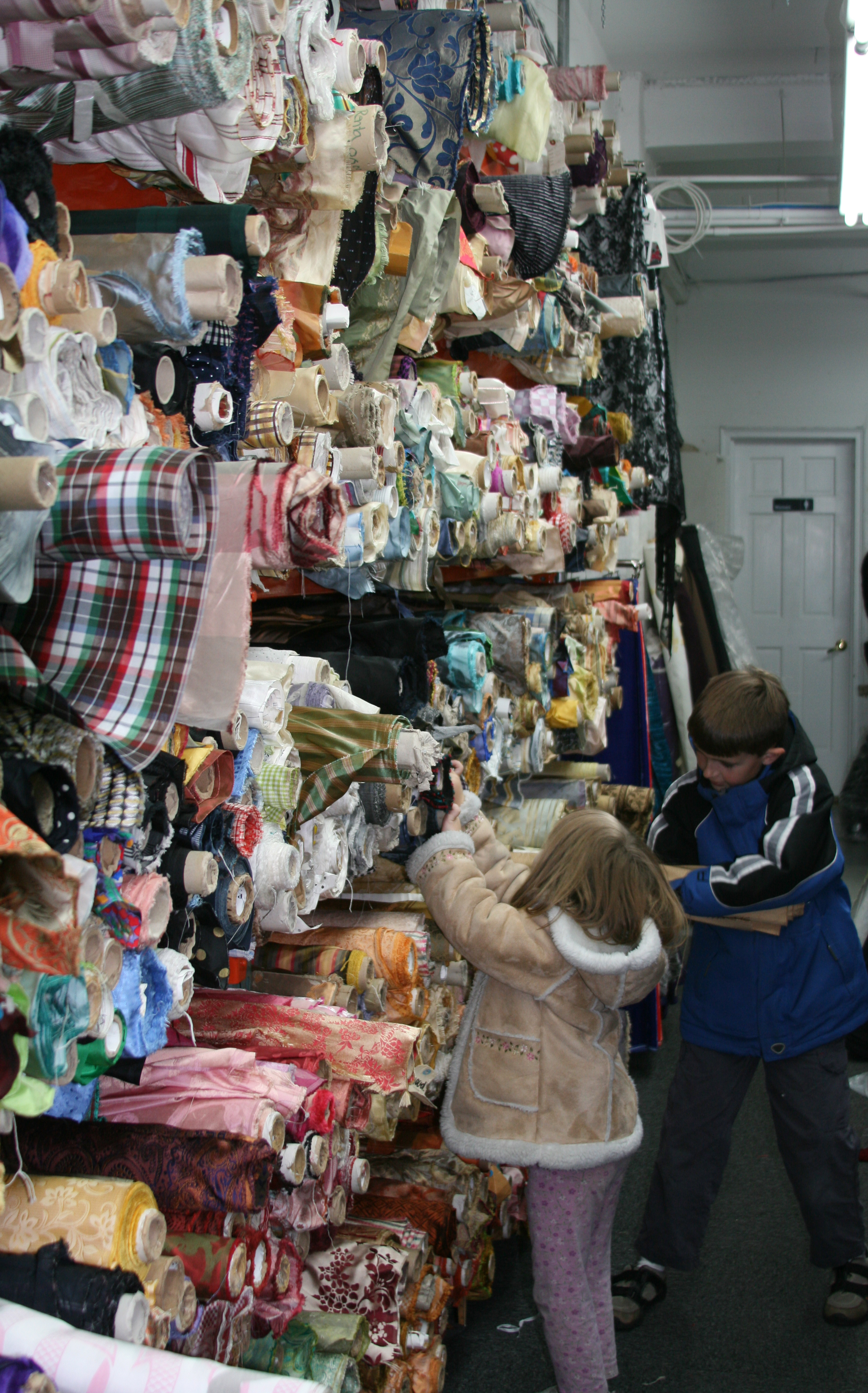 “Hey! I saw that charmeuse first!”

Once we got back from the park, we hopped a bus to midtown Manhattan and saw the heart of the city. We began at Mood Fabrics, famous from the show Project Runway. Despite its appearance on the show, there doesn’t actually appear to be any sign marking the store, and it’s lucky that Carolyn remembered its address inside a huge high-rise. Inside, an actual elevator operator let us out on the 3rd floor and into what has to be the most insanely complete fabric store on the planet. Carolyn and I gaped at the thousands of bolts of fabrics of all descriptions, and Neil and Kelly even reenacted the “quick, choose your fabrics!” scene that’s key to seemingly every episode of Project Runway.

Giving lie to the New Yorker stereotype, the Mood folks were ridiculously helpful and friendly, and seemed pleased that Project Runway fanboys and fangirls had traipsed all the way from California to ransack their store. 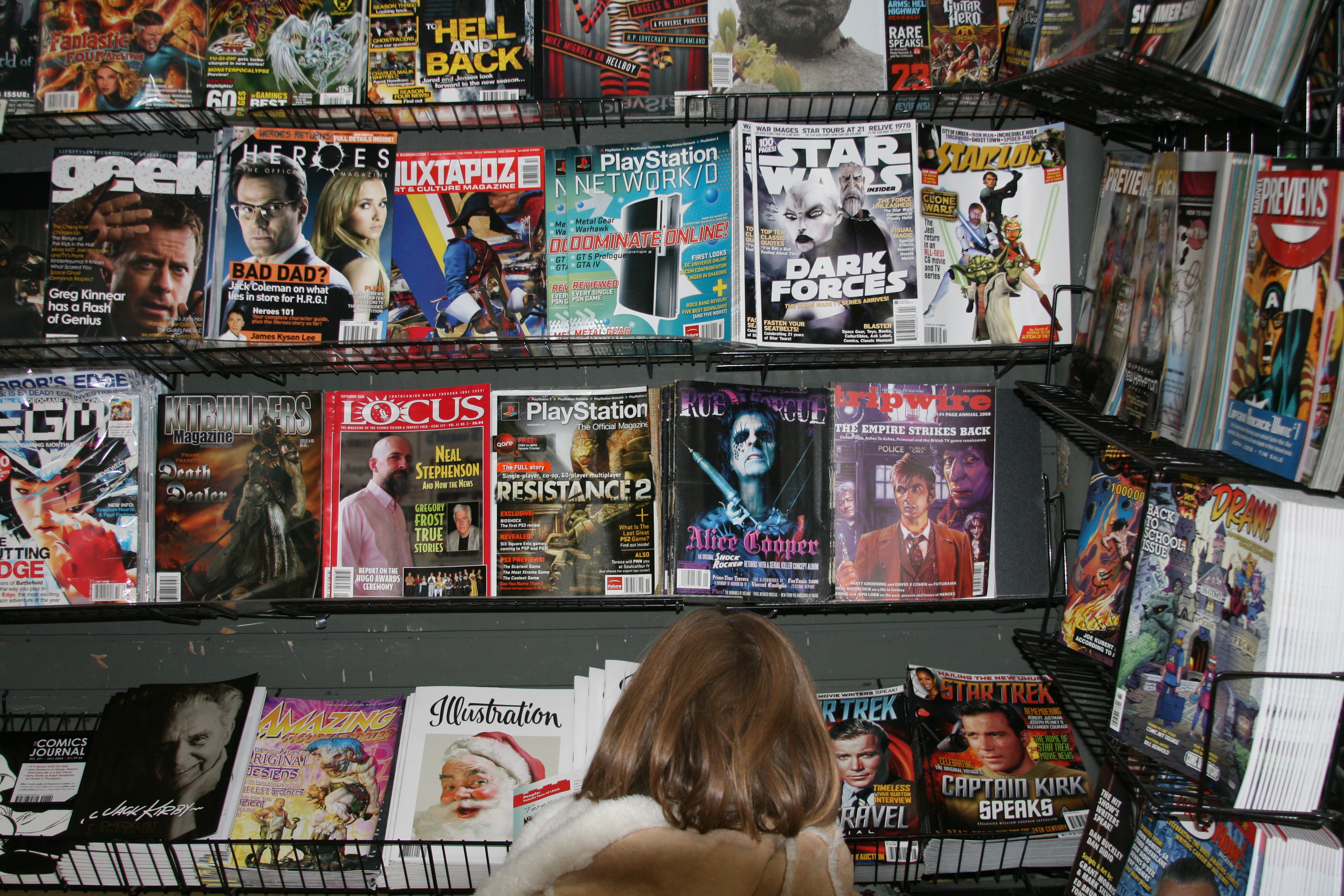 Making our way uptown, we next encountered Midtown Comics, an absolutely terrific comic shop in the heart of Manhattan. No matter what your tastes are, these guys have you covered, in a friendly, brightly lit store filled floor to ceiling with cool stuff. 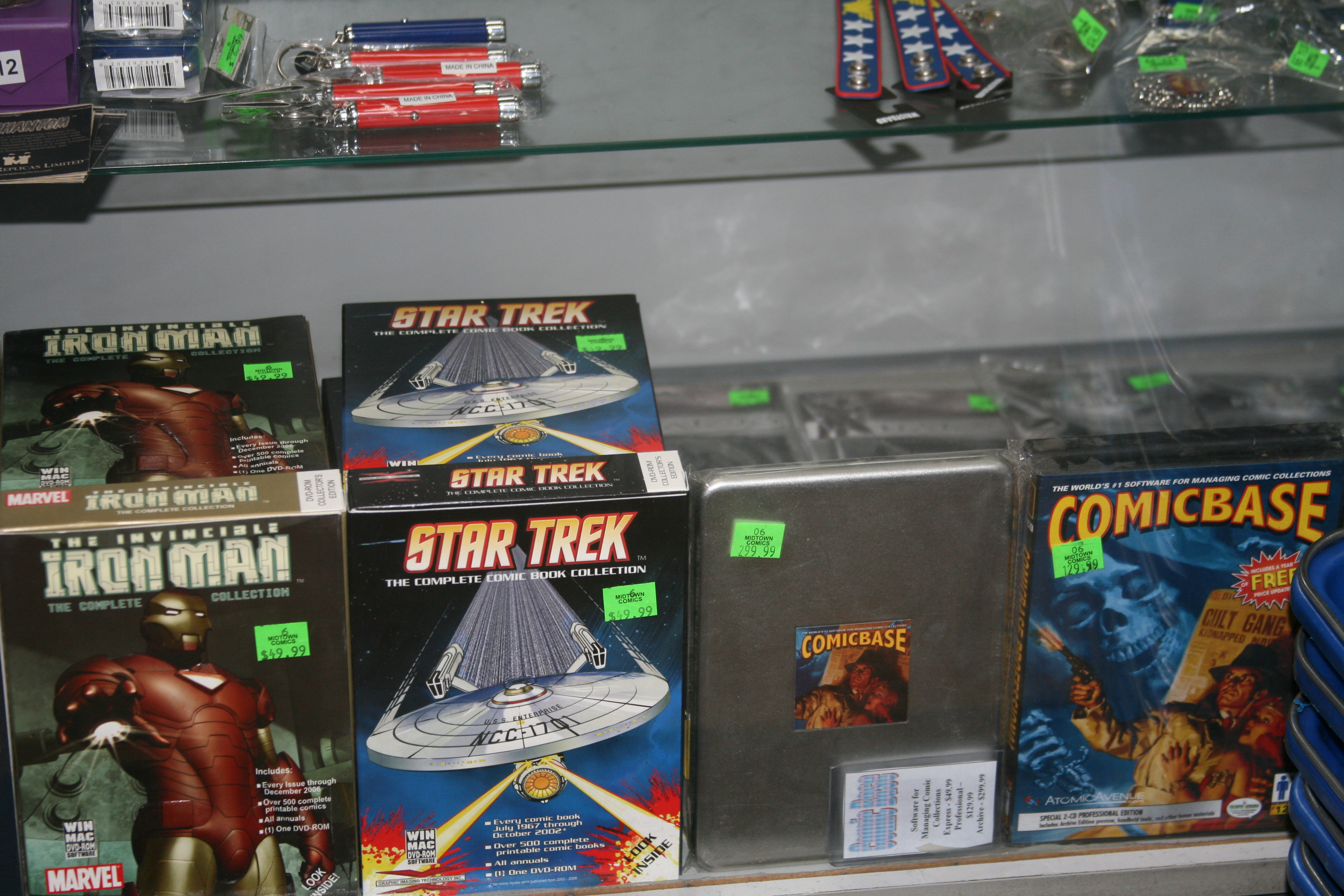 As witness to this, I even spotted copies of the terrific British comics magazine Tripwire, as well as stocks of ComicBase Professional and Archive Editions right under the checkout counter. Awesome!

But it got even better: no sooner had we crossed into Times Square and started taking pictures than we were set upon by members of the Microsoft Windows street team who’s been running huge “I’m a PC” advertisements on the giant video screens of Times Square featuring various folks and the things they do with their computers. 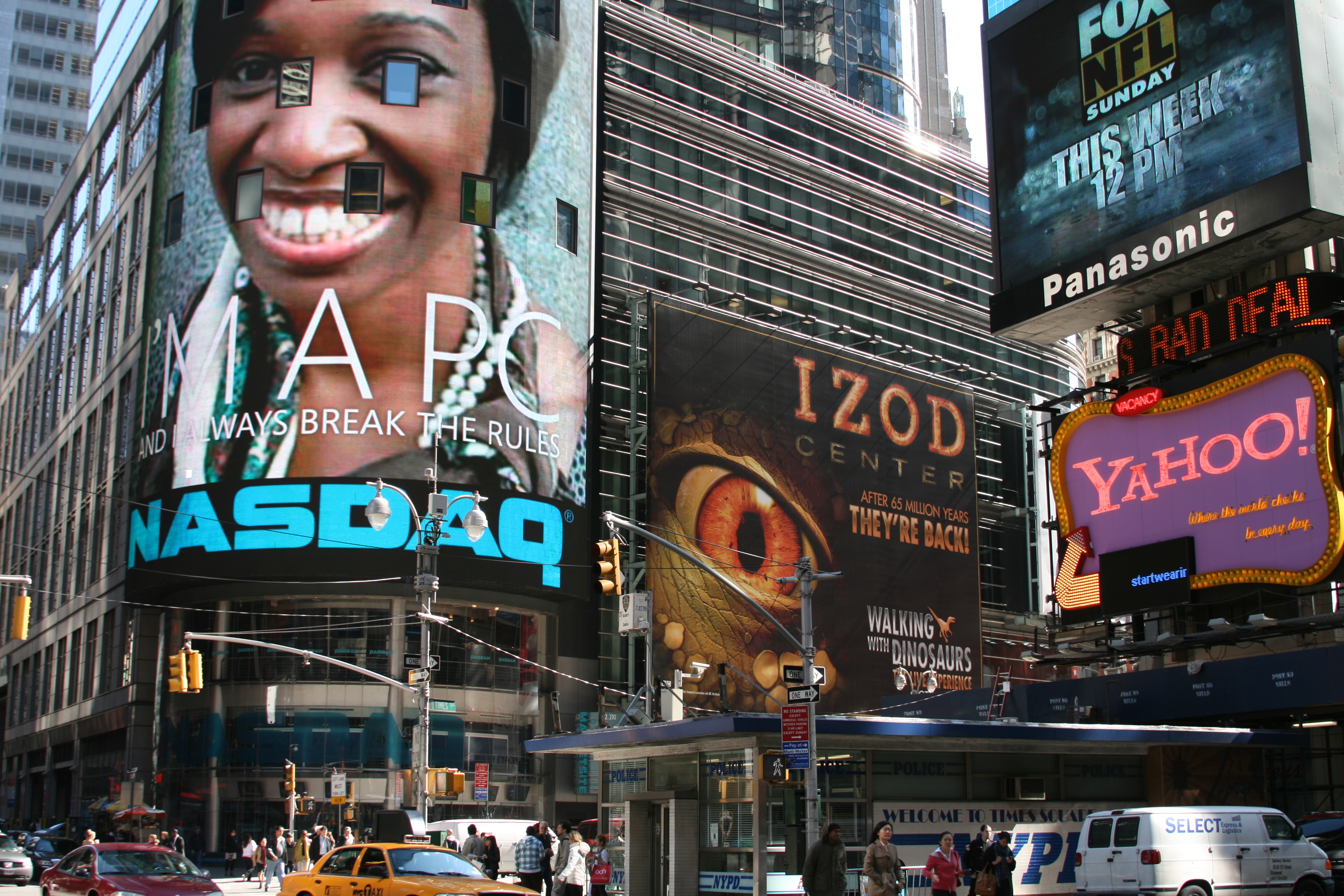 “Want to be in a commercial?” they asked me, pointing up to the big boards.

No dummy me, I had to think this over for some time before answering.“Some time” in this case was precisely 0.00001 seconds, after which I cheerfully answered, “Absolutely!”

Pictures were snapped, arcane legal agreements were clicked through, and sometime tonight, the horrified visitors to Times Square will be greeted with my sixty foot tall mug accompanied by the following legend:

I’m a PC
…and I make the world’s biggest comic book database.

This entry was posted in ComicBase, Travel. Bookmark the permalink.