A Western Digital 1.5 TB My Book World Edition network drive, for use as an off-site backup. $199 at Fry’s. Because you can never have you can never have enough backups. Especially ones that will keep you going even if an earthquake levels your office building, ninjas crack open your safe, and zombies occupy the bank, preventing you from getting to the backups in your safe deposit box.

(It’s possible that I’ve watched too many action movies over the break).

But now, after a day or so of backing up, I’ll have one…err… three less things to worry about for 2010.

From the Department of Unintended Design Consequences

It’s no secret that I love the idea of LED lighting, and hate the idea that so much energy from a conventional incandescent bulb is wasted in the form of heat. It turns out, though, that colder climes are discovering that there’s a lethal downside to electrical efficiency when it comes to traffic lights:

The problem is obvious in retrospect, but I for one sure didn’t think of it ahead of time. I suspect there’s one of those annoying, “try it small before rolling out across an entire city” lessons we should be taking away from this one, as any fix is likely to be hugely expensive.

As a rule, opening bands are something to be tolerated, giving you a chance to grab that extra drink before the main act comes on. Of the scores of concerts I’ve gone to, I can only think of a couple that turned out to be really pleasant surprises: Radio 4 (opening for Gang of Four) and now Clayton Senne, opening for Everclear at the Independent.

“Clayton who??” I can practically hear you say–and frankly, this sounds exactly the sort of opening act that you sort of plan to come to the show late for so you can miss. That was certainly my plan when Carolyn and I went up to the city to see Everclear, but the unknown presence of a second opener frustrated it, so I wound up catching Senne’s show anyway–and I’ve rarely been so happy to have a plan go wrong.

Senne’s the leader of a jazzy three-piece combo that would right at home in a smokin’ New Orleans club, but instead hails from Orlando, Florida. Unpretentious to a fault, he’s clearly having the time of his life with his first big tour, and he’s well worth checking out. Fan videos like this will give you some idea of what he’s about, but you should definitely check him out on his infinitely better-recorded debut disc, “Wonderland” — I’ll admit that even after seeing him play and chatting with him for a bit, I dawdled in putting his disc in to give it a proper spin, but darn this guy (and his band: bassist Mitchell Boyles and drummer Scott Hall) can really play!

Like the saying goes: check this guy’s music out, and if your toes aren’t tapping and your body moving by the third cut, see a doctor. You may be dead 😉

Please share in our joy at putting a stake through the heart of our old telephone system at the office–or at least the telephone answering/routing portion of it. (Note to AT&T: Your 974 is a fine office phone, but the 984 answering system at the heart of it—to quote Jean-Louis Gassée– “…could be even better.” I’ll spare you the translation of what that implies it is currently).

In any case, the direct phone numbers to reach us all on are:

Wish us luck as we settle into the new phone system, and please let us know if you have any difficulty with any part of it.

Comics Come to the Kindle

Given my previous blog about the future of comics, it was great to see Mik Pascal bring his popular (and very un-PC) comic “Bru-Hed’s Guide to Gettin’ Girls NOW!” to the Kindle. If you’ve got an e-reading device (or even just an Amazon account), you can download this out-of-print funnybook for the bargain price of $0.99 right now. Who knew old Bru-Hed would prove a leader in technology? 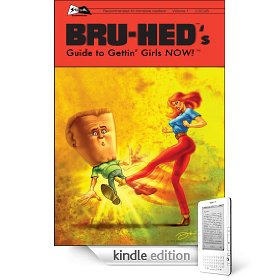 Alternative publishers beat out giants Marvel and DC for milestone

(Modesto, CA) Traditional comic books have finally joined the many thousands of books available on Amazon’s popular Kindle e-reader. However, the largest players, Marvel and DC (publishers of Spider-Man and Batman, respectively), are so far nowhere to be found. Instead, readers can find a small selection of alternative publisher fare, a few even produced by a single individual rather than the usual “assembly line” of mainstream comics.

One such comic that just became available is BRU-HED’S GUIDE TO GETTIN’ GIRLS NOW! by Mike Pascale and his Schism Comics imprint, celebrating its 10th anniversary of last publication. The comedic black-and-white, 28-page (including covers) comic books, first published in paper form in 1997 (volume 1) and 1999 (volume 2), are now uploadable to the Kindle for a fraction of their original $2.50 cover price. At just 99 cents each, it may well be the format of the future for the over 75-year-old American comic book format.

“This was a no-brainer,” explains writer-artist Mike Pascale. “I was alerted to the possibility by Pete Bickford of the dominant online comic-book marketplace atomicavenue.com, who educated me about the format and inherent opportunity. Since the big mainstream publishers’ titles are in color, they’re probably waiting for a color version of the Kindle. But for independent black-and-white comic creators like myself, this is an ideal way to get my characters and comics to the masses on a level playing field at an affordable price. Since my first published book, the ‘Test-Market Ashcan Edition’ of BRU-HED back in 1993 was the first US comic book with a fully digitally-painted cover, being ‘first’ in another digital domain seemed natural. I hope to entertain as many folks as possible with this new format in the future, and that my fellow creators will follow suit with this innovative and popular device. I’m very, very grateful to Amazon for giving us ‘little guys’ the same opportunity as the majors.”

The “e-comic” features various single- and multi-page gags showing the big-headed, beer-drinking, sexist-but-laughable Bru-Hed offering “advice” on picking up women, which often lands him in various stages of trouble. The character has also appeared briefly on MTV, the Sci-Fi channel, and The Tonight Show with Jay Leno. BRU-HED’S GUIDE TO GETTIN’ GIRLS NOW! volumes 1 and 2 are available from Amazon.com’s Kindle Store for .99 each, and will play on any Kindle, PC, or supported wireless device such as Apple’s iPhone.