…actually I want a whole bunch of them. For the office 😉

(and apparently available as a screen saver too!)

For the first time in as long as I can remember, I’m utterly at a loss as to which processor is faster—or whether buying a server with a new processor (or even multiple processors) will make the slightest bit of difference in terms of overall performance of our web site.

Back in the day, it was easier to say whether a new processor would be faster than an old one: just look at the clock speed. 1.6 GHz smoked a 800 MHz processor; 2.4 GHz was better still, and 3.6 GHz was the best you could buy. But then heat factors put an end to simple clock speed races and Intel and AMD turned to multiple processors, multiple cores, different piplelining schemes, and so on.

I’ve heard the advice that multiple cores and processors are essentially worthless unless you’re running a machine specifically geared toward using the multiple cores. But how then, is a 2.4 GHz Core 2 Duo noticeably outperforming my 3.4 GHz Pentium at most regular desktop work—none of which (that I can see) has been optimized to work with two processors?

Then there’s the question of our web servers: when running Windows Server 2003 and IIS 6, is there any advantage at all to upgrading our 3.0 GHz Xeon processor-based servers to whatever the top-of-the-line offerings from Dell or Supermicro are? So far as I can tell, the major bottlenecks for web servers are bandwidth (not immediately upgradeable), disk (we’re already running fast SATA drives in RAID configurations), and only then the processor speed. That said, kicking off compiles in ASP.Net does feel kind of slow to me, and I’d be willing to throw some cash at solving the problem…but I’d have to have some assurance first that throwing cash at it would actually make a noticeable difference in some metric I care about (# of web requests serviced, compile speeds, etc.)

Ideally, what I’d like to have a sense for is, “If I spend $X to buy Y, my <something I care about> will run Z% faster than it does now.” Several nights spent googling around on this score really haven’t yielded anything enlightening. I’ll admit it: right now, I’m at a loss.

Can anyone with real-world experience on our brave new world of processors kick in some words of wisdom on this subject?

With the system coming up on its first anniversary in a couple of months, we decided to have some fun. This week, we kicked off the Atomic Avenue Comic Book Trivia Challenge, designed to test your knowledge of the fabulous four-color fantasy world of comics.

From January 15th through the 31st, we’re posting a new question (actually a question and a bonus question) each day to the Atomic Avenue web site. Answer them correctly, and you’re entered to win great daily prizes including Marvel Masterworks volumes, DC Archives, Marvel Essentials, and more. Best yet, your total score adds up to give you a chance to win three amazing prizes which are among the few things you can’t find on Atomic Avenue—or anywhere else, for that matter:

– A copy of Batman: The Dark Knight signed by Frank Miller himself

– Frank Miller’s copy of Daredevil #179 (Elektra vs. Bullseye) from his personal collection

(As a karmic bonus, Atomic Avenue arranged to buy the prizes from the Comic Book Legal Defense Fund in order to help them raise funds for their efforts. Check out http://www.cbldf.org for more information on this terrific organization)

If you think you know your stuff, head on over to Atomic Avenue and give it a shot!

Basically, it means replacing the hard drive in (usually, a notebook) computer with a device which uses flash memory attached to an SATA or IDE interface, and fits in the same form factor as a notebook drive. The main advantages are speed, silence, and minimal power draw. Plus, the drives are nigh-indestructible, providing you don’t dip them in the pool.

Right now, it’s pretty much a boutique technology, but that’s changing awfully fast. A low-end SSD can be cobbled together using a $21.95 Addonics 2.5″ adapter and a couple of CF cards. At the higher end, Toshiba announced an SSD with a whopping 128 GB of capacity, albeit at a yet-to-be-disclosed price, topped by BiTMICRO’s CES announcement of drives of up to 832 GB capacity in the fall. Apple’s also offering a 64 GB SSD drive as a (pricy!) option in its new MacBook Air.

In one of those decisions that makes onlookers roll their eyes, the French courts have ruled that Amazon.com violated their law by offering books at too high of a discount when you factor in Amazon’s free shipping offer. Amazon.com was ordered to pay 1,000 euros/day fine unless they comply…and Amazon decided to just pay the fine and keep the free shipping.

Realistically, the French courts will likely just raise the fine to a level at which no company can keep paying it, but for now, I say, “Hooray for Amazon.com!”

I’m a nine-year Apple veteran myself, but having said that: Is it just me, or was anyone else incredibly underwhelmed by Apple’s product announcements today?

Like so many other tech guys, I freely admit I look forward to each Macworld with a fair amount of anticipation. I love taking a spin in the fabled Steve Jobs Reality Distortion Field™, checking out bold new design ideas, and seeing what at least one strongly opinionated company thinks will be the Next Big Thing for technology…

…but today, we got expensive online video rentals and a skinny, incredibly expensive laptop.

At this moment in time, it looks like Blu-ray has a leg up in the high-definition video format wars, particularly with news that Time-Warner had decided to switch to the format, and rumors afoot at CES that Universal and Paramount may soon follow. That said, I suspect all of us would rather declare somebody the winner so we could all enjoy better-looking movies at home without worrying we bought into the wrong format.

In addition to the “big war” of HD-Video vs. Blu-ray, however, it turns out that the manufacturers, in their wisdom, have also added a bunch of new interactivity features to each format—and now there’s concern that disks designed to use the features specified by the later “Profile 1.1” or “Profile 2.0” version of the Blu-ray format won’t work properly on players built around the earlier version of that spec.

Two things struck me about that article. First off, it’s apparently a good idea to buy a player which can be upgraded by flashing the firmware to add new capabilities. (I’d claim to be prescient in this regard, but to be honest, I really bought my PS3 to play Guitar Hero III and Rock Band—Blu-ray movie support was just a nice extra for me when making the purchase decision).

The second was how fantastically unexcited I am about the Java-based “interactivity” features which both the Blu-ray and HD-Video camps are willing to risk so much market confusion over. In my life, I have a pretty much perfect record of regretting the minutes I’ve spent with any client-side Java application, whether it involves animated cats jumping around in my browser, or some “interactive” feature launched by pressing the wrong button on my TV’s remote control. It’s always possible that someone will come up with an application which makes us all into believers on this score, but I haven’t seen it yet. I hate to say it, but when I’m watching a movie, I pretty much want to…well, just watch the movie. Sound and picture matter a lot to me when I do that. Interactive jumping cats…not so much.

But hey, since I’m currently doing my high-def movie-watching on a PS3, I guess I’ll likely be able to get my bouncing cats too. Yay.

The Less-Crazy Mythbuster on Tech Annoyances

He comes off as a tad cranky at times, but I definitely like his idea for modular rechargeable battery cells… 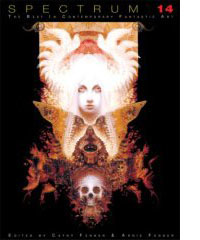 Spectrum is a yearly anthology featuring the most notable fantasy and science-fiction illustrations of the previous year. Congratulations go out to longtime ComicBase cover artist Glen Orbik for once again scoring a featured position in this year’s Spectrum for the terrific space-themed cover he did for us on ComicBase 11. Great work, Glen!