Is Comic-Con About Comics Anymore? (And if not, does it matter?)

“So how was Comic-Con?” asked what seemed like the millionth friend of mine who knew I just got back. “From what I can see on the news, is it even about comics anymore?”

I’ll confess, I’m of two minds on the subject. On one hand, the ghosts of some eighteen previous Comic-Cons keep rattling around in my head, and I remember when the entire show floor was full of people selling actual comic books. Fifty-cent and dollar comic boxes were everywhere, and I managed to haul away several long boxes full of finds for my own collection. It was a glorious time.

But over time, actual comic sellers became a smaller and smaller part of the show. Today, purveyors of comic pamphlets occupy a mere four or five aisles in a sprawling convention hall that runs the length of eight city blocks. Even when comic publishers, artists, and small press are figured in, actual comic books are almost as much a minority in the convention hall as straight male hairstylists in the Castro. In my darker moments, this fills me with something approaching despair (about the lack of comics, not hetero hairdressers, mind you).

But really, when you look over the vast nerdapalooza that Comic-Con has become, it’s hard to stay dour for long. Just think about it: for every conceivable sub-section of geek culture, Comic-Con offers five days where you can tribe up and enjoy the company of your fellow fans. Whether you prefer to dress in a snarky gamer T-shirt, as Wolverine, or as a laser-toting Victorian dandy, you can find others who share your love for your particular brand of pop culture. 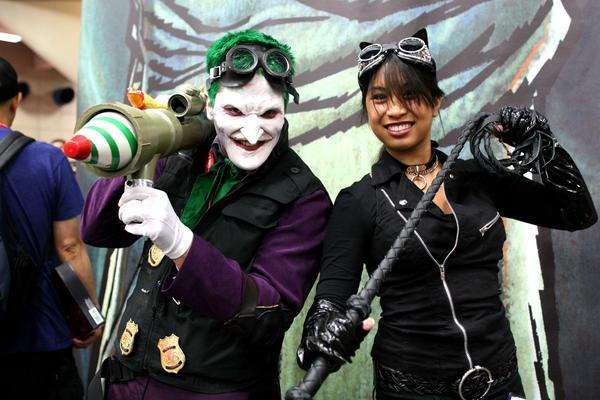 You can spend your loot on action figures, video games, steampunk-inspired watches, or even software to manage those thousands of comics you’ve been piling up since you were a kid. You can meet the people who created and starred in your favorite movies, wrote your favorite books, or drew that amazing painting of the robots with donuts. This year, I even bumped into a guy who produces old-time radio dramas about zombies.

And yeah, even as the convention spills out to dominate downtown San Diego during its run, having overflowed the bounds of a million-square-foot convention center, you’d still turn it into a tiny, diminished thing if took all the comics out of Comic-Con. It’s no longer a great place to find that copy of Batman #473  you’ve been searching for–the internet has taken over much of the action on that front. But instead, Comic-Con glories in Batman video games, Captain America movies, and more comic-themed art, T-Shirts and action figures than you can shake a Batarang at.

So yes, Comic-Con is still about comics, even if it’s not so much about comic books. It’s about being a fan, loving cool things, and getting a chance to have fun with other folks who love the same things you do. And that, is a wonderful thing indeed.