Ever since we devised the rank system on Atomic Avenue (a mishmash of US and British Air Force titles for the most part, with no small hat tip to the film Sky Captain and the World of Tomorrow), there’s never been anyone who reached the 2500 rating points required to make the top rank: “Wing Commander”

Checking my feedback this morning, however, I noticed I’m getting awfully close… 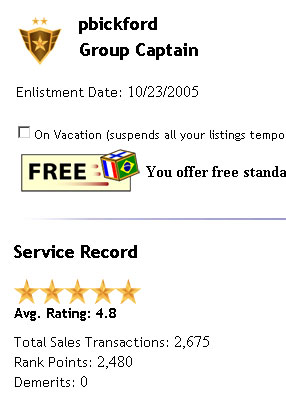 In theory, this means ten more Five-Star ratings would put me over the top. I’ll admit, for a system that I helped concoct (and which I suppose I could rig by editing the database), I’m irrationally excited by the prospect of hitting the top rank.

(Maybe then I’ll finally get the key to the Wing Commander’s Executive Washroom! 😉

This entry was posted in Atomic Avenue. Bookmark the permalink.

One response to “(Almost) a Wing Commander!”