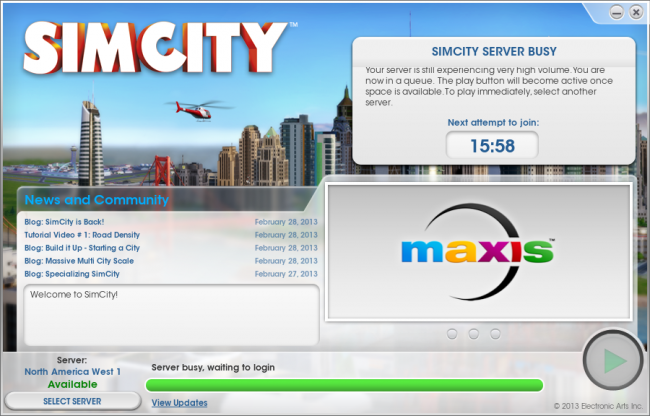 Imagine a big-budget game–the crowning jewel of one of the most successful game franchises ever. Then imagine that in order to play it in single player mode, you need to be able to connect to the company’s overloaded servers, so that you routinely get 20-minute-long “waiting to connect’ messages whenever you launch the game on your own machine.

How could the situation possibly get worse? Release a “patch” which de-features the game in order to make it run. Then offer affected customers to file for a refund…but refuse to actually process any of those refund requests.

Blast From the Past: Why Comics Cost So #!@# Much

While cleaning up server drives today, I stumbled across the following article draft from 2005 I wrote for Britain’s Tripwire Magazine. Included with all its original notes to my editor, Joel Meadows.

How popular do you think Friends would be if everyone who wanted to check out Rachel’s new hairdo had to pony up a couple of quid before their telly would switch on? Do you think your mum would be able to indulge her Hello! habit if each issue cost £15-£20? And how many kids would tune in to Spider-Man’s latest adventure if a single 32-page issue cost £2.00 << Joel—please  replace with the usual UK price of a US $2.99 comic >>

Oh wait—we already know the answer to that last one. “Not a hell of a lot.”

But if we want to answer the question of why Spidey costs 12p a page << substitute actual number >> to read, we ought to start out why asking why Hello! doesn’t. An issue of Hello! costs an order of magnitude more to produce, has superior production values, is printed on costlier stock, and involves the talents of countless top-flight photographers, journalists, and editors. Even with the price breaks printers give when printing in Hello! quantities, the raw cost of each copy can easily run to several pounds.

But it doesn’t stop there. The publisher also has to worry about the expense of schlepping the breathless saga of Fergie’s latest diet to every Tesco between Whitechapel and Royston-Vasey These are then shifted through various distributors and sub-distributors at a steep discount, before whatever dog-eared copies remain unsold on Monday morning are returned to the publisher with a demand for credit. But despite these murderous publishing conditions, Hello! still manages to earn megabucks for its publisher, pushing out a circulation of  some <> issues weekly, and costing readers just under £2.00 per copy, delivered right to their door>><>

Meanwhile, what of our friend Peter Parker? He may be able to capture crooks just like flies, but it’s all he can do to shift about copies in the entire world market, and only a tiny percentage of that in the UK. And we all know what kind of financial shape Marvel’s in. Not to rub salt in the wound, but did I happen to mention that Spider-Man’s one of the comic industry’s most successful comics?

So what’s Hello! got that Spidey doesn’t? For that matter, how does NBC manage to pay the multimillion dollar salaries of Courtney Cox and Co. without requiring you, the loyal viewer, to part with a pitiful pence of your hard-earned wages?

To riff on James Carville, the Rumpelstiltzkin of American politics, “It’s the advertising, stupid.”

The whole reason that anyone other than her husband and a few dedicated stalkers even know who Lisa Kudrow is can largely be credited to the fact that most of her fans don’t actually have to pay to see her act. Instead, countless companies wanting to tap into that hip young 18-34 demographic kindly kick in hundreds of thousands of pounds for the opportunity to spend 30 seconds trying to sell you miracle teeth whiteners while you wonder what kind of trouble that wacky Ross will be getting into after right after those important messages.

Once upon a time, comic companies seemed to get it. Picking up two comics at random, we first come across 1974’s Star Spangled War Stories, #194. This issue included 14 ad pages plus a four-page color insert (hocking wedding rings, of all things!). Of the ad pages, only three were “house ads” (paid for by DC itself). The rest were for everything from guitar lessons to Hostess Fruit pies. More tellingly, a good half of the ad pages were broken into smaller ads for monster posters, magic itching powder, and everything in between. In short, 50% of the magazine was ads. But the 18 story pages cost the reader a mere 25¢.

By comparison, Marvel’s Cage #2 has the same number of pages, albeit thinner, glossier ones. Thirteen of these are ad pages—28% fewer than the 1974 comic. More tellingly, Marvel either owned or had a stake in the advertisements on seven of those pages, meaning that they were a cost to Marvel, instead of a source of ad revenue. There were only six pages of clear outside ads. Not surprisingly Cage #2 costs $2.99—twelve times the cost of the 1974 comic. That’s more than three times the combined rate of inflation for those years (368%).

So my question to publishers is, “Do you think it might be possible, just possible that you might sell more comics at 92¢ each than at $2.99? If so, why not try something old: kick your ad staff’s collective hineys into gear and sell some bloody ads. Sell big ads. Sell little, inexpensive ads. If you have to, sell microscopic ads for joy buzzers and X-Ray Spex again.

But however you do it, you’ve got to move more of the cost of publishing to someone other than the comics reader. Otherwise, you can look forward to the circulation numbers reserved for daft ventures like the £15 supermarket celebrity mag, the £6.00 daily newspaper, or…damn it all… the modern comic book.

Peter Bickford is the creator of ComicBase. He lives with his wife Carolyn, son Neil, and way, way too many comics in San Jose, California. He can be reached at pbickford@human-computing.com