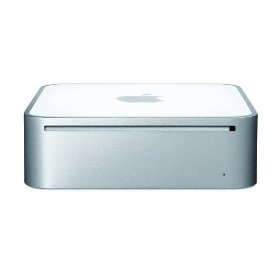 We all knew Apple made pretty computers with great interfaces, but have they also managed to create the most power-efficient Windows server machine on the market?

We just wrapped up a huge round of server upgrades at comicbase.com and AtomicAvenue.com. Last to go were our three oldest servers which we use to run a bunch of essential but boring jobs like our DNS, email, Microsoft Exchange, and Active Directory Domains.

The old servers were “1U” jobs–your basic short, wide, and very long boxes packed to the gills with heat-generating electronics. These were cooled–barely–by a suite of fans at the back of each box blowing at hurricane speeds.

Having these servers around the office was like having a cleaning woman permanently parked in the back room vacuuming up a storm. In fact, the noise of these servers was enough of a factor that finding a “server room” to put them in where they (a) wouldn’t overheat and (b) wouldn’t drive us all bonkers with their unceasing roar–was a major part of the search for our last two office locations.

So what replaced these power-sucking, heat-generating, noise-blasting behemoths? A trio of tiny Mac Minis running Windows Server 2008, thanks to Apple’s Boot Camp utility which lets you dual-boot them as either Windows or Mac OS X machines.

These are computers so diminutive that we can fit all three of them side by side on a single level of our server cabinet. They’re so quiet and power-efficient that they don’t even have (or need) fans to cool them. And the total power draw? About 57 watts total when they’re running full-out at their assigned jobs!

Now, I can’t recommend the Mac Mini for every server job. For one thing, their small, slow, laptop-style drives make them unsuitable for anything involving the storage of any great amount of data, or where disk speed enters the equation in any real way. For instance, they’d make pretty mediocre file servers or web servers, and fairly horrific database servers. They also lack a lot of server niceties like hot-swappable drives, redundant network adapters…or any of the other things which IT folks tend to gush over but rarely turn out to be useful in the real world.

But for jobs like DNS service, where the computer can load all the data it’ll ever need to serve in a small amount of its RAM, they seem (so far) to be working out as well as the buffest, most costly machine we could have thrown at the problem. Better yet, they’re doing it at a fairly trivial hardware cost, in near-perfect silence, and with a power draw hundreds of watts less than the servers they replaced.

I don’t know how Apple managed it, but I’m blown away that Apple–known everywhere for pretty interfaces and beautiful design–may have also created the world’s most energy-efficient server in the bargain. Well done, guys!

This entry was posted in Atomic Avenue, ComicBase, Geek Stuff and tagged LinkedIn. Bookmark the permalink.

3 responses to “Mac Mini: The World’s Most Power-Efficient Windows Server (?!)”