Australia Tech Post Mortem: What Worked and What Didn’t

Like a lot of geeks, I spend a lot more time planning which bits of techno-kit to bring with me on a trip than worrying whether I’ve actually remembered to pack clothes or not. I gave it a good shot with my family’s two-week trip to Australia, but had a few misfires along the way. Here’s a brief rundown on what gadgets proved worth their travel weight down under, and which weren’t up to the task:

A crazy-cheap computer that’s light, has great battery life, a built-in camera for Skyping to the folks back home, and weighs next to nothing. If it weren’t for the slightly undersized keyboard and problematic positioning of the up-arrow key (net to the right Shift key), it’d be the perfect on-the-go computer. If you got an email from me during the past two weeks, it was likely sent from this sand-covered little netbook. I was also able to video-chat with my folks back in the states from one of the two hotel rooms that featured workable internet.

It’s been superseded the XSi (and higher-end models), but the shots from this 10.1 megapixel camera are light years ahead of the vacation snaps I took years ago–not to mention the pathetic camera phone shots we all sometimes have to make do with. It survived surf and sand with aplomb, and it’s the definitely my best tool to capture the beauty of a perfect beach or view.

This was a shocker to me, since my iPhone has become such a daily part of my life. I even congratulated  myself on having the foresight to call ahead and set up a a global data roaming plan so that I’d get hit with a data charge of only $60 or so for the two weeks in Australia, vs. the several-hundred-dollar horror stories I’ve heard of from unwary travelers who dared to access the internet abroad without an international plan.

The truth is, I may as well have left it at home for all the good it did me. I burned through 1/3 of my allotted 50 MB of internet traffic within a day of arrival just trying to use it for basic hotel lookups and GPS navigation. Data speeds were almost useless even in the big cities (hosted by Vodafone locally), and GPS navigation was impossible due to slow response times and winding streets without turn-by-turn routing. Within a day, we’d made the decision to go back to the car rental place and pick up a ¨real¨ GPS (more on that in a moment).

Also, even with AT&T‘s pricey ¨Global Traveler¨ plan, we faced fees of well over a dollar a minute for calls, and more to pick up voice mails. And that was a discount from the regular roaming rates of over $3/minute(!). In the end, we wound up picking up a “burner” pre-paid phone in a mall for about $80 to give us the minimal mount of phone service we needed on the trip.

The truth is, without the internet and an affordable calling plan, the iPhone is hugely crippled. It was really a huge disappointment, although I did have one wonderful moment of joy with it at the end. I realized that you can actually type in non-map queries into Google Maps like “Comic Store, Brisbane, Australia” and have it instantly plot your location in the city next to every available comic store nearby–even with street view pictures of the shops. That was cool!

Thinking to save $59, I bowed out of simply buying the Australian maps for my own Tom Tom GPS, thinking I could just use the Google Maps on my iPhone. This was a disaster, and we quickly wound up heading around to the car hire place to pick up a rental Tom Tom for the duration of the trip. 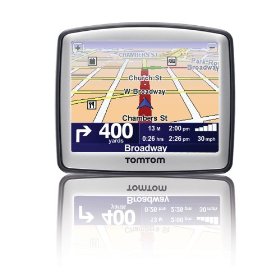 Once it was up on our dash, it turned the trip instantly from a harried series of missed turns and frayed nerves into a relatively calm drive–albeit on what my American reflexes told me was the wrong side of the road. It also did a terrific job of pointing out gas, tourist attractions, and the numerous speed cameras that cover the Australian landscape.

If you’re planning to drive in Australia, do yourself a favor and bring this along–it would have been a far worse vacation without it.

This entry was posted in Geek Stuff, Travel. Bookmark the permalink.