Neil and I abandoned the ComicBase booth on opening night to the care of the other staffers and went out on a Quest for Swag. We were so mobbed in by people, however, that we’d all but abandoned that mission when we spotted a sign next to the Fantagraphics booth mentioning that they were a stop on the Peanuts Scavenger Hunt.

“What’s that?” we asked a staffer, pointing at the sign. He informed us that if you went to the Peanuts booth (really the Charles Schulz Museum booth) and got a scavenger hunt card, you could take it around to different places on the show floor to get it signed. If you filled out all the spaces, you might get a prize (a Snoopy tote bag).

There were only 50 bags being given away per day, however, and about 30,000 people in the hall, so I didn’t reckon our chances were that good. Still, after a short trip to the Peanuts booth to pick up a card (and give ’noopy!” a big hug) we were off to the races. 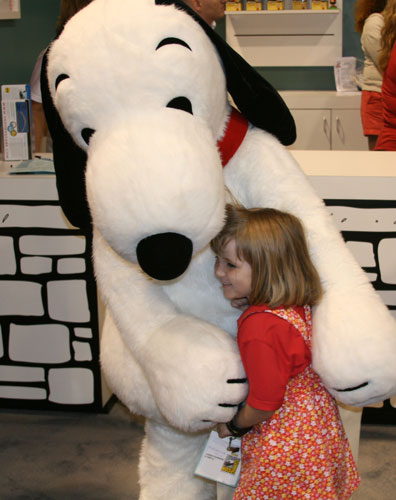 The first three booths were a piece of cake, situated in the quieter end of the hall. But the fourth stop was some 40 rows down at the far end of the exhibition center (and right in the worst of the action). Neil and I had caught up to Kelly and Carolyn by that point, and I put Kelly on my shoulders for the long trip down to the Funko booth. Twenty minutes later, we finally arrived, but had to wait for the signature person to get free since the booth was mobbed with people, well, actually buying things. By the time we left, I was certain the whole thing was just for a laugh, since there were only 50 prizes, and I’d seen dozens of people in line at the Peanuts booth right when we started.

Still, Neil and Kelly were excited by the whole event, and we mushed our way back to the Dark Horse booth to collect our final signature from the always-delightful Dark Horse staff. At last, we were ready to head for the Peanuts booth, when we came straught across Snoopy himself being led by a handler (bathroom break?) and followed in his wake all the way back to the booth.

Once there, however, I found myself giving another “Don’t be too disappointed if you don’t get anything” talk to Neil, explaining that there were at least 30 people in front of us in line, and they only had 50 bags to start with. Neil wanted to wait anyway, and his patience was rewarded when a staffer appeared out of nowhere and said, ”Oh! You’ve got your card all filled out? You don’t need to wait in the checkout line for that–just go straight to the front and show them your card. We’ve still got 18 bags left!”

In the end, both Neil and Kelly met ’noopy!, got a cool tote bag with “Snoopy for President” on it, and had a wonderful first day at the Comic-Con–thanks in no small part to the wonderful folks at the Peanuts booth.

This entry was posted in Comics, Family and Friends, Life. Bookmark the permalink.